How to Play Guide for Stygian: Reign of the Old Ones

This article serves as a basic How To Play guide for Stygian: Reign of the Old Ones. Feel free to add to this guide with any and all information related to Stygian's gameplay.

Stygian: Reign of the Old Ones is a roleplaying horror game that invites the player to explore the grim streets of Arkham, a once brilliant city now transported by malign forces into an unknown region of the cosmos. In your journeys, you will encounter strange phenomenon, forge unlikely alliances, battle foes, and have your sanity pushed to its uttermost limits. The goal? Survive. Endure to the end of the game with your sanity and well-being intact, and perhaps solve some of the mysteries of this supernatural plane along the way.

Role-playing your character based on their skills and beliefs is the most effective way a player can survive the unforgiving world of Stygian. Be sure to pay attention to your dialogue responses, review collected evidence, consult your map, gather medicinal and crafting knowledge, take advantage of rare items, and learn as much as you can about your enemies before engaging. Only by playing to your strengths will you survive.

You have just gained up a Level. Do not raise your hopes up though, you are still as thin as a rail against the horrors lurking in the dark corners of the cosmos.

The Level of your character is representative of the knowledge and experience they have gained throughout the game. Levels are earned by accumulating Experience. The player starts off at Level 1 and can level their character to a maximum of Level 10.

ANGST is a representation of the pain and suffering your character must endure throughout their journey. It is the antithetical representation of Experience, measured as negative experience that is gained through exploration, story progression, failed skill checks, and combat. Witnessing horrific events will also cause the player character to gain ANGST.

The ANGST bar found in the character menu tallies the total ANGST points accumulated by the character. Each consecutive ANGST Level requires 100 points of ANGST more than the previous ANGST Level, with character’s being able to attain a maximum of 5500 ANGST points.

For each ANGST Level gained, the player character acquires a Defect of their choice, which functions like a negative Perk or Ability.

Darkness is an environmental state the player character may encounter in areas and rooms that lack light. Spending time in a Dark Area will cause your character to begin losing Sanity at a steady rate. A lantern (with kerosene) can be equipped in your character's off-hand item slot to fend off darkness and mitigate its negative effects.

Your character can learn to craft gadgets, consumables, weapons, and other unique items during their time in Arkham. Through research and crafting, you can discover new solutions to nightmarish problems.

Artifacts are occult items that come with both a Power and a Malediction. Powers and Maledictions for most artifacts are locked on first discovering the item. However, these effects can be deciphered using Occult Research. But beware, an artifact’s power and malediction will take effect the moment you equip it, whether its effects have been unlocked or not.

Though often avoidable, combat is an integral part of Stygian's gameplay. Combat provides opportunities for the player character to accumulate experience and gain items. In certain cases combat may also reveal the only way forward, draining the player character of Health and Sanity and pushing them to their furthest limits.

Combat in Stygian is turn-based and tactical, allowing characters and enemies to move and act during their respective turns. Combat can be resolved in one of three ways:

Player's are encouraged to find alternative means of progressing through Stygian without necessitating combat. Be it through the use of Stealth, Speechcraft, or any number of skills at the player's disposal, direct conflict can (and should) be avoided when possible.

The cursor (mouse) is used to interact with the world of Stygian. Players can use the cursor to move their character, initiate dialogue with NPCs, and interact with objects. A glowing cursor indicates a point of interest or potential skill use when hovering over an interactional object.

The following is a list of console (keyboard) shortcut keys available to the player:

Note: Many of these actions are also available via buttons at the bottom of the screen.

The following tips and tricks are provided by the game any time the player enters the loading screen: 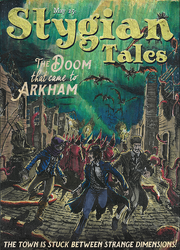